What is a swaddle?

A swaddle is a cloth that is tightly wrapped around baby to restrict movement of the arms and legs. Swaddling is an age-old practice that goes back almost as far as human history, itself. There are many different types of swaddles available to parents 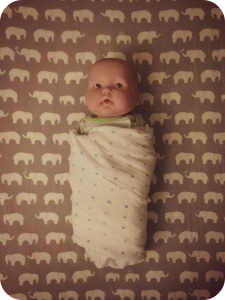 now, we will discuss them in part 3 of this series.

Who should be swaddled?

Most newborns should be swaddled. Personally, I have yet to work with a baby who hasn’t responded well to being swaddled. The only time I would recommend ditching the swaddle for a newborn is if baby is constantly breaking out after all alternatives have been tried, or if baby screams and cannot be calmed by other methods. Babies often fight being swaddled at first but once calmed down, enjoy the swaddle.

When should you swaddle?

Newborns can safely be swaddled when they are placed on their backs to sleep, or in your arms.

At the end of the day, there is not much we can do when a parent doesn’t want swaddle. Our job is to assist Mom and Dad and educate them in their time of need. As a NCS, you should present the facts on swaddling, and proper swaddling techniques. Most of the time the parents will change their mind. However, if the parent is still opposed, it’s time to let it go.

Why should you swaddle?

After 9 months in the womb, babies are used to being restricted in their movement. It is said that swaddling recreates the secure and cozy feeling of the womb. In 2002, the medical journal Pediatrics published a study that explained why babies who are swaddled sleep more peacefully by preventing spontaneous movements (called reflex motion) from waking them continually during the night. The same year, the Journal of Applied Physiology wrote that swaddled infants stay in REM sleep longer than those who were not.