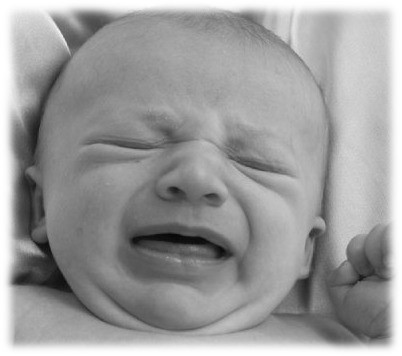 It is not uncommon for a baby to be fussy after a feeding and there are a wide number of potential causes for the fussiness being exhibited.  Some of these causes are easy to identify and remedy while others may require the help of a specialist or may go unidentified until the baby “grows out of the issue.”  Three of the most common reasons for post-feeding fussiness include gas, reflux, and intolerance.  Each of these issues has their own unique combination of symptoms and remedies requiring different levels of care and expertise.

Gas is a condition caused by excess air being in baby’s tummy or digestive tract. Some of the main symptoms of gas discomfort in a baby include pulling knees chest, and being squirmy in addition to general fussiness after a feed.  Gas is fairly easy to spot and the treatment for gas is often the first thing I try.  These treatments include changing the type of bottle used (if bottle feeding), burping the baby properly and often enough, and special exercises designed to help baby release gas.  If they are using a bottle without an insert, I suggest they change to a bottle with an insert. I do not believe any brand works better than the next, but I do think the insert is important to make sure baby isn’t swallowing any air. Some common bottles with inserts include Dr. Brown, Tommee Tippee (the new version), and BornFree.  Babies with excess air in their stomachs will need to be burped to alleviate the pressure and discomfort caused by swallowed air. In addition to burping baby, you can do bicycle kicks with baby’s legs. To do this gently push babies legs towards their tummy one at a time, like a bicycle kick.

Reflux results from a weak or immature esophageal sphincter.  The esophageal sphincter is a muscle between the esophagus and stomach that prevents the stomach’s contents from entering the esophagus.  When it is weak or immature, a baby’s stomach contents including stomach acid will sometimes enter into the esophagus after a feed causing the baby pain and discomfort.  When a baby has reflux, they will most often arch their back, cry intensely, and have excessive amounts of spit up after a feed.  While reflux is very uncomfortable for babies, the remedies are fairly easy to implement.  Feeding the baby in an upright position and ensuring they remain in a sitting or upright position at least 15 minutes after eating helps keep the stomach contents in the stomach until baby has had time to digest them.  If baby had moderate to severe reflux, it may also be necessary for the baby to take medication for reflux but the baby’s pediatrician should be consulted before the baby is given any medicine.

Some newborns will have cow’s milk allergies or sensitivities and it is imperative to consult with a pediatrician immediately. The effects of an infant being allergic or sensitive to cow’s milk happen pretty quickly. The most common sign is being irritable during and immediately after a feeding. Baby may vomit or have diarrhea, skin rash, hives, or have a red ring around their rectum. Often times a pediatrician will recommend switching to a different type of formula. If Mom is breastfeeding, she may need to look into an elimination diet.

If none of the above issues are the cause of the fussiness issues, it may be necessary to perform some independent research on other potential causes.  However, when in doubt, always consult the pediatrician before implementing treatments or remedies not approved by a licensed physician.  Above all, be patient with baby and love on them as you work through their fussiness, determine its cause, and help them to feel better.